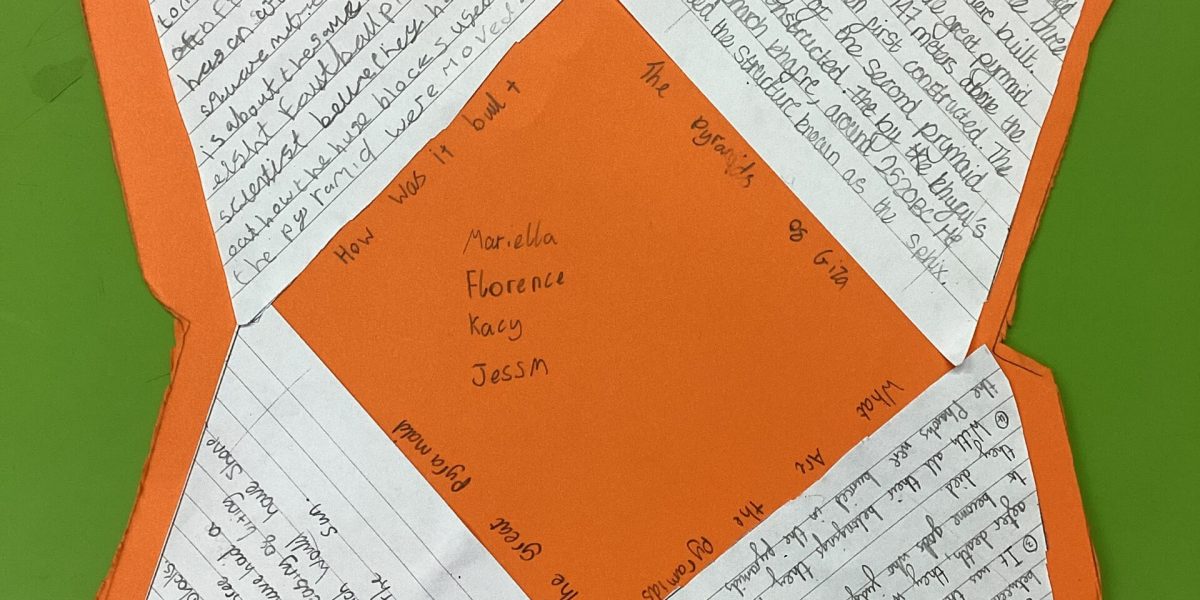 Year 5/6 have been delving into the history of pyramids and obelisks as part of the history topic. They then created a ‘tetrahedral kite’ as part of their learning on frame structures in design technology, which they have used to present their new found knowledge! Year R have been very active this week - thank you to Mr Alford for his help! Year 1/2 have been getting outside and Year 3/4 have been reading a story with two sides. I wonder that could mean?

Year R have enjoyed being active during their first few weeks at school. Inclusion was a real highlight and the children had an amazing time jumping along the air track, aiming carefully in golf, balancing on the wave boards and improving their agility on the obstacle course. We also had a brilliant first PE lesson with Matt Alford, one of our governors, who came to take us on a bike adventure!

This week the children have been working hard in the outside area following their own lines of enquiry. They have enjoyed acting out the story of On Sudden Hill, making reading dens and hunting for their spellings in the sand.

Year 3/4 have loved reading the story, ‘A Tale of Two Beasts’ by Fiona Roberton, a story of two halves, each half told from a different point of view. The children have done lots of work around the text and, to finish the unit, have written letters from the viewpoint of one character to the other. They then spent time at different editing stations to edit and evaluate their work. Favourite stations included ‘editing ears’ and ‘spyglass spelling’!

In Year 5/6 we have been sharpening our agility and co-ordination in PE through playing ‘Endball’. The children pass the ball between each other and score a point by throwing the ball to a teammate in the end square. Over the next few weeks, we will be playing variations of the game and children who are displaying good sportsmanship will gain points that count towards the final score.

In maths, Year 5, the children were learning about perimeter and multi-step problems. Year 6 went on some imaginary dinner dates for which they had to budget for a specified group of people. The children really enjoyed creating a night out with the family or setting up a ‘no-sharing’ double date. We also checked our mathletics logins were working and got a head start on our to do lists.

We have continued to delve in the past and investigated pyramids and obelisks in history. A very interesting session, with minimal input, was held in D&T where children were tasked with creating a tetrahedral kite from an image, two straws and some tissue paper… you can see the results for yourself.

In RE, we continued to explore the concept of freedom and wrote acrostic poems to show our understanding of this.